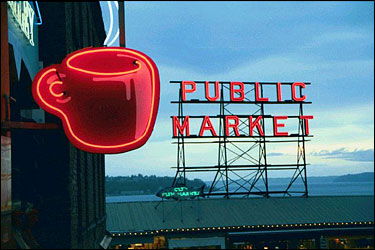 A look into the nation’s coffee capital, where espresso isn’t “just a drink” and being a barista isn’t “just a job.” (Excerpted from a longer piece for MSN City Guides, April 2008)

Thanks to Starbucks, coffee is big business in America, where specialty espresso drinks—lattes, cappuccinos, macchiatos—have replaced the diner “cup of joe.”  Along the way, Starbucks’ hometown of Seattle became synonymous with coffee, famed for its espresso stands and cafés on every block.

Long before Starbucks was a household name, the coffee revolution was underway in the Pacific Northwest in the mid-1970s, when old standbys like B&O Espresso and Café Allegro—Seattle’s first independent coffee-shop—were defining a new culture. Today, customers can afford to be picky, and there are a number of considerations that go into choosing a coffeehouse, ranging from the roast of the beans to the baristas behind the counter.

Try to list the best coffee-shops in Seattle or which baristas are most skilled, and you’re in for a fierce debate.  Want to start a coffeehouse of your own?  Take cues from the three V’s—Vivace, Caffe Vita, and Victrola—all of which roast (and sell) their own beans and manage at least one retail location.  Think you’d rather be a barista?  Better have a real passion for coffee and gear up for a rigorous, meticulous training session because you’re up against baristas who have competed (yes, competed) at the national level.  So how did coffee become a way of life in Seattle?

As Stewart Lee Allen notes in his book “The Devil’s Cup: A History of the World According to Coffee,” coffee has historically been the counter-cultural beverage of choice (compared to the more proper and refined tea) and the French Revolution was essentially organized by university students inside Parisian cafes.

According to John K. Buller—coffee consultant and former CEO of Tully’s, a Seattle-based coffee chain—Seattle’s reputation for marching to the tune of its drum and its coffee culture inevitably go hand in hand “It’s the place you go to get creative and discuss things with people and work out problems,” he said.

In the early 1980s, Buller was working as a buyer and had his eureka moment when he came across an espresso machine.  Upon his return, he opened a dessert café called Treats, which had one of the first espresso machines in Seattle, making Buller one of its first baristas.  Soon after, there was an espresso cart explosion downtown, feeding the demand.

How can you tell if a coffeeshop truly exemplifies Seattle’s culture?  “Square tables,” says Buller.  “You can push them together to form one big table … [In Seattle], coffeehouses are gathering places to check e-mail, take a break, or even work.  People aren’t living in office buildings.”  Indeed, many Internet start-ups spend their early days working out of cafés, which one could argue makes baristas an integral part of Seattle’s economy.

The fastest draw in the Northwest

So what’s the measure of a good barista?  The Specialty Coffee Association of America has been holding the United States Barista Competition (May 2-5, 2008) for eight years now to answer this very question.  The competition is comprised of baristas who scored well on the local level, with the Northwest Regional being especially competitive.

With rules like this, it’s no surprise baristas train for up to 15-20 hours a week: “Competitors must impress the event’s judges as they prepare and serve 12 coffee beverages, including four espressos, four cappuccinos and four original signature drinks of their own creation – all within 15 minutes. Competitors are judged on station cleanliness, taste, beverage presentation, technical skills and total impression.”

Baristas from Portland, Oregon have traditionally done very well in the competition, although Seattle has produced some quick draws of its own. Maki Campbell, who works at Zoka Coffee Roaster & Tea Co. in the University District, earned second place in the Northwest Regional Barista Competition with her proficient espresso drawing and artistic touches.  She was inspired to compete after assisting in the training of former co-worker Jennifer Prince, who placed first in 2006.

“I used to work in the field of graphic design in Japan and making coffee (and tea) is an art form for me,” said Campbell.  “I’m not into competition … I try to make a great cup of coffee with my heart.  But coffee is a harvest item so I also have to listen to the beans – that’s part of the culinary art.”

Campbell sees her customers as guests, a philosophy that has come from her study in the hospitality art of Rikyu, a Japanese tea-serving ceremony.  It is a holistic approach to service where making the drink is only one step of the process, and perhaps explains her strong performances at the regional and national levels.

Being skilled enough to compete on this level is an aspiration for younger baristas.  Benjamin Hasko, 21, grew up in the Seattle area on Bainbridge Island, has been craving coffee since he was eight and has been working in coffee shops since he was legally old enough to have a job.  “I’ve worked pretty much every café on Bainbridge Island,” he said.  “I would love to compete in barista competitions – but for now, I’m just making the rounds of Seattle coffee shops and earning my chops.”

Tatiana Becker, barista and co-owner of Trabant Coffee & Chai, has also competed on the regional and national levels.  While the competitions promote camaraderie among baristas and help hone their skills, she also thinks they fall short of the goal to “promote the growth, excellence & recognition in the barista profession.”  She feels the format could use a little excitement, as “even other baristas don’t watch even half of a competition” and most Americans have never heard of these competitions.

Her solution?  “Out of my love for the craft and my desire to see it better understood, I created a presentation that would be more fun for the audience to watch. I dressed like a sorority girl, played Sir-Mix-A lot, and served my specialty drink in beer hats.” But in all seriousness, she is concerned about changing the way baristas are viewed in America.

A world of coffee

This year’s World Barista Championship is fast approaching and will be held in Copenhagen, Denmark from June 19-22.  The Danish have dominated the competition in recent years, with baristas from other European countries also scoring well and American baristas occasionally placing in the top three.

“In the international competitions, many baristas from around the world are in their thirties and have families. You don’t see that too much around here,” said Becker.  “In the United States, the perception is not much better than that of a fast-food worker. This affects how much Americans are willing to pay for a hand-crafted, expertly prepared cup of coffee.”

Still, Bekcer and her husband Mike Gregory left their jobs as engineers at Microsoft to open Trabant.  She adds, “We’ve certainly had to scale back our lifestyles. However, we’re of the school that the best things in life aren’t things.”

The staff of Trabant is well-traveled and world savvy when it comes to coffee, a skill that has been cultivated through training over time. Certainly, understanding Seattle coffee also about understanding history of coffee as it relates to world.

Shiwani Srivastava is a Seattle-based freelance writer covering cultural trends and community issues.  In her free time, she ponders the dilemmas of being bicoastal as the New-to-Seattle blogger for the Examiner online.